Year 4 travels back in time to Pompeii with Dr Who 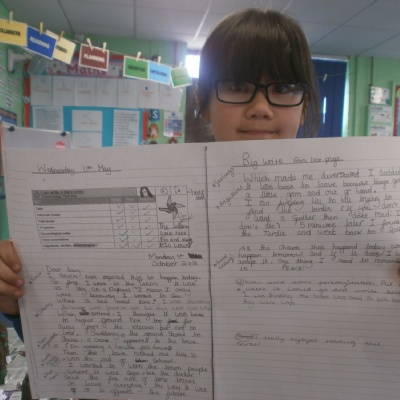 In year 4 we have been travelling back in time with Dr Who to Pompeii. We have been finding out about the devastation that Mount Vesuvius caused in Pompeii.

Dear diary,
I never EVER expected what happened today to happen! So first thing this morning, I joined Dr Who in the TARDIS (Time and Relative Dimension in Space), which was as big as an elephant, and went back to Pompeii 79AD. I mean I only went back because I wanted to see what it looked like, I thought the houses would stand tall however they were little lumps.

When I arrived, I thought it was best to get to higher ground not to far away from Mount Vesuvius but not to close either.

Suddenly, the ground started to shake, a crack appeared in the town, I'm guessing that the houses fell down (well that's what it looked like). Then the lava rushed out the volcano like it was the end of school. I wanted to warn the people of Pompeii of the eruption and where was safe to go, but the Dr said the first rule of time travel is to leave everything the way it was or it effects the future. This made me devastated.I decided at this point it was best to leave. Things were getting dangerously out of hand and a little grim for my liking.

I ran towards the TARDIS for what felt like a life time. Five minutes later, I found myself back in 2016.

All the choas that happened today won't happen tomorrow and if it does i will not accept it. Well thats my day today, Its almost my bedtime........PEACE!