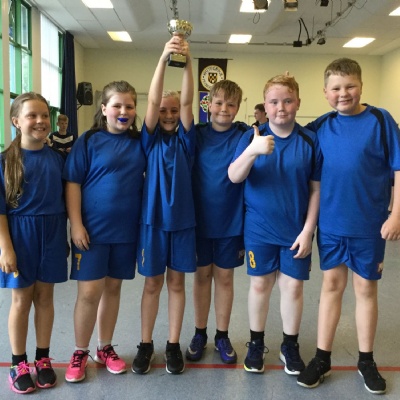 Monday 4th July came and we travelled to Whitegrove for our annual Year 5/6 Benchball Tournament. This year we were joined by two teams from Wooden Hill.

First choice of being in the team is given to those who have not been in a school team yet all year and then we go to those who have only done 1 team and then 2 teams and work our way through Years 5 & 6 until we have enough to make a team.

Mondays after school since Easter, had been our Benchball Club and we had practised the skills and game play each week. The 12 players chose Kelsey and Alisha to be the captains of the two teams along with Bradley and D.J. to be the Vice-Captains. The teams were selected and off we went to Whitegrove.

There was some fantastic play from both our teams. Kelsey and Alisha giving their teams as much encouragement as they could, Jamie brilliant in defence and, in fact, all 12 were absouletly fantastic.

Team Ali did the best they could and finished a very creditable sixth and Team Kels finished third overall having lost to both of the Wooden Hill teams. Wooden Hill's 'A' team were declared the overall winners, but Team Kels had finished higher up the final league than Whitegrove, so they regained the Whitegrove Challenge Trophy for us..

Well done to everyone involved and very nice to see the Year 5/6's winning.