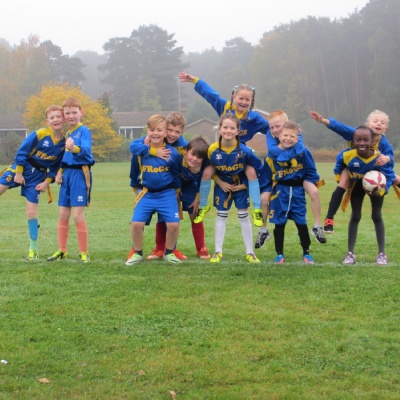 We've been practising in our PE lessons how to play Tag Rugby. Passing backwards, knock-on, running with the ball and tackling have all been looked at, along with trying to get our heads around the off-side rule.

A squad of 11 were chosen and off we went to Great Hollands Rec on the first day back after the half-term holiday.

In our group, we lost to Binfield and then beat Warfield, Crownwood and Jennets Park meaning we qualified second in our group for the quarter-finals.

Wooden Hill were the opponents for this. The game was delayed due to a knee injury to one of their players and it was 1-1 at the end of normal time. A little confusion over extra-time from some of the players on the pitch led to Wooden Hill scoring a second try and we were unable to equalise in the time we had left.

A very upset team were knocked out, but all should be delighted with the way they played and represented the school on the day - and be looking forward to the year 5 tournament next year.