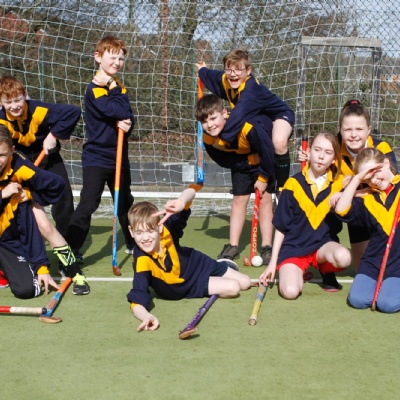 The hockey Tournament was the first to arrive and the squad of 10 was chosen. We turned up on the day ready to play anyone who stepped up before us, not caring if it was a team of Year 5 or Year 6's from other schools.

Matthew, Phillp and Riley worked out how to put the goalie kit on as they were to be sharing it during the group stage and Crowthorne's year 5s were out first opposition. We very quickly went 1-0 down, but battled back superbly and Daniel levelled to make the final score 1-1.

The next two group games didn't go quite aswell for us. New Scotland Hill's Year 6's beat us 4-0 and then Cranbourne's Year 6's also beat us 2-0.

Despite not qualifying for the quarter finals, the team gave it their best shot and gained valuable experience of the tournament and game set up for next year when they're in Year 6.

Click here to see some photos form the tournament