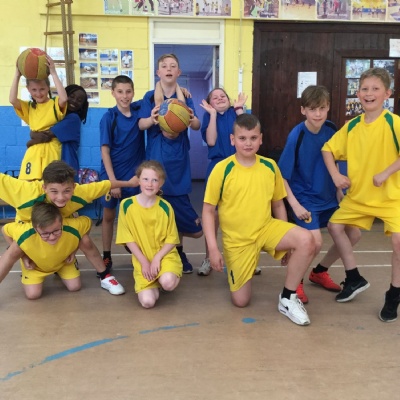 We'd practised in PE for a half-term, looking at 2-1-2 defence and a 5-out attack and arrived in the gym ready to put it all into pratcise.

The blue team found themsleves playing in the final against Whitegrove's Year 6 team, the winner of this match being declared the winner of the tournament. Back and forth the game went from end-to-end. Shots were reigned in on the basket, but all seemed to bounce off or roll round and out of the basket.

Lennie got the ball and shot from quite a distance away and jumped for joy when the ball sank straight thorugh the basket without touching it, to give us a 3-0 lead.  Whitegrove kept battling and got the score back to 3-2. We went back to the end-to-end game with shots bouncing off the backboard and basket  at all angles. Such a relief was felt when the final whistle went with the realisation that we had beaten Whitegrove in the final 3-2 and therefore won the whole tournament. Not only that, but we had regained possession of the Great Hollands/Whitegrove Challenge Trophy, which Whitegrove have had for the last year. :-)

All 12 children played as well as they could and should be proud of the way they represented school. Click here to see the team photos from the tournament.